NEXT UP IS CUP KARTS SPRING NATIONALS AT CHARLOTTE

Coyote Motorsports racers had an outstanding start to the new year at Bushnell with Owen Lloyd scoring the 206 Junior feature win on his 2021 Zenith chassis, plus a number of other Coyote drivers landing on the podium and in top positions in Sportsman, Junior, Senior and Masters competition.

“All in all Bushnell was a really good showing to kick off the new race season and the new Cup Karts South series,” Coyote owner Jim Lipari said. “We had a good mix of veteran and new drivers at the race, and Owen Lloyd definitely led the charge. Owen sweeping every round of Junior was incredible to see. We had some good runs in the other divisions, as well, and we’re all looking forward to getting back to action at Charlotte here in a few days.” 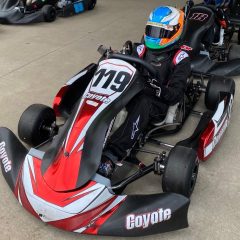 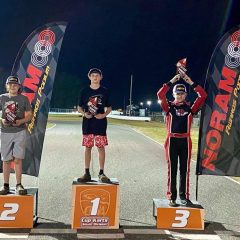 Owen atop the podium 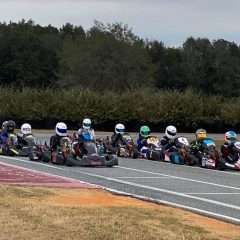 Owen Lloyd bringing the Junior field to the green 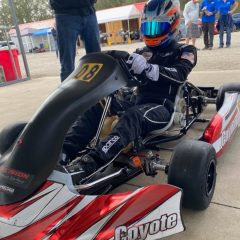 Pauly Massimino on his PPK Coyote 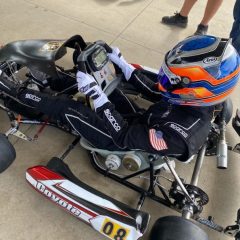 Owen Lloyd’s day in Junior was one of pure domination. The Florida racer made it a clean sweep in the 12-kart division, qualifying pole with a lap of 59.524 around the 17-turn, two-thirds-mile course. He’d go on to win both heat races and capture the 12-lap feature by a 4.9-second margin over second.

Lloyd definitely gave his new Zenith a great ride in his first race with the chassis, and we’re looking forward to more success from Owen this season.

Accomplished TaG and 2-cycle kart racer Pauly Massimino is a new addition to the Coyote stable this year racing with John Seglem’s new Precision Performance Karting team. Massimino utilized the Cup Kart South first round at Bushnell to get some racing under his belt on a new Coyote Zenith, and the Charlotte, N.C., racer drove to a pair of fifth-place finishes in 206 Senior Light and Senior Medium.

Massimino is one of a number of Coyote racers gearing up for the Cup Karts Spring Nationals March 5-7 at Charlotte Motor Speedway.

Also in Light, Josiah Figueroa, the eldest of three racing Figueroa brothers, drove his Coyote to a P8 result.

Chris Carroll led the way for Coyote in Senior Medium, the largest class of the event with 20 entrants. Crossing the stripe a couple positions ahead of Massimino, Carroll helped give the Coyote / PPK team two of the top-five positions with a fine P3 run.

Carroll’s podium finish at Bushnell followed up an impressive run for him at WKA Daytona KartWeek in December, which you can read about later in this post.

The younger pair of Figueroa brothers raced their Coyotes in the 206 Sportsman division. Elijah had the better day of the two, finishing P7 with Isaiah finishing P9. Elijah’s best run of the day came in heat two, which saw him finish fifth.

Jacksonville, Fla.’s Sean Meier made the trip a few hours south to race at Bushnell. Meier wheeled his familiar black No. 30 to a P6 result in 206 Senior Heavy. James Inscoe finished a couple spots back of Meier in eighth on his Coyote.

Inscoe’s best run of the day came in 206 Masters for drivers age 35 and up. He’d finish a strong fourth in the competitive 14-kart field. Inscoe crossed the stripe just ahead of fellow Coyote racer John Seglem on his No. 32 Coyote / PPK entry.

We also want to mention 206 Masters regular Brad Farmer of Brad’s Kart & Parts. Farmer was on hand at Bushnell helping out by providing factory support for Coyote teams. Farmer will be back behind the wheel of a new Coyote at Charlotte.

The 206 Senior division was offered on the final day of WKA’s Daytona KartWeek 2020 December 30 at the Daytona International Speedway Kart Track, located in the DIS infield inside of turn three of the super speedway.

Paul Dykstra on grid at Daytona 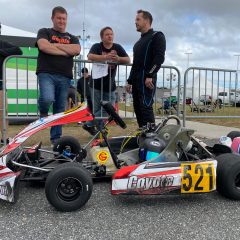 Chris Carroll and his crew 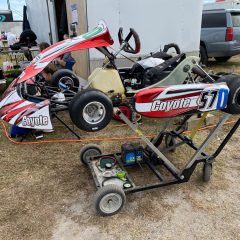 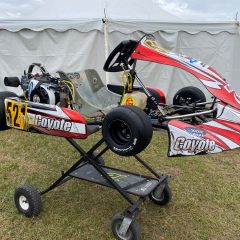 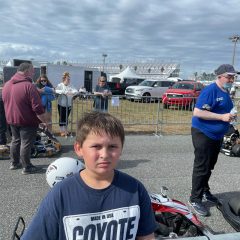 Carroll took the opportunity to make his first-ever start at the Daytona Kart Track, which in most past years has offered only 2-cycle divisions at the Manufacturers Cup Sprint Nationals.

Carroll didn’t let his inexperience at the World Center of Racing hold him back. In another display of his never-give-up demeanor, the Rochester, N.Y., native now residing in Charleston, S.C., improved his Zenith in every round of competition throughout the day.

After qualifying 13th, Carroll made adjustments to his chassis to gain some more speed and finish P9 in both the heat and pre-final. The veteran national champion saved his best round of the day for last, racing to an impressive fifth-place finish in the 18-lap final in a field of 25 entries.

Paul Dykstra joined Carroll on a Coyote at Daytona. The Illinois driver entered 206 Senior and ran around the P20 spot throughout the day.

“I wanted to give a special thanks to Nisa and Paul Dykstra,” Jim Lipari said. “Nisa has been a huge help to all of us as sort of a public relations and ambassador for Coyote at a lot of races. She keeps us up-to-date at races we can’t get to like the KRA series at New Castle and KartWeek at Daytona. She’s always willing to help Coyote racers and teams and we appreciate the Dykstras and all they do.”

Spring Nationals at Charlotte up next

One of the biggest events of the year is set to take place March 5-7 with the inaugural Cup Karts Spring Nationals at the newly renovated Charlotte Motor Speedway Kart Track.

Coyote racers from all over the country will be racing at Charlotte, and our shop has been busy getting new karts and components prepared for customers.

“I’m not exactly sure the number of Coyotes that will be at Charlotte, but it looks to be somewhere around 20 drivers; several of the senior racers will enter multiple classes,” Lipari commented while looking ahead to the Spring Nationals. “We’ll have teams from the Southeast, Northeast, Midwest and all over. We’ve had to kick it in high gear at the shop because it seems like everyone wants to race in the Spring Nationals at Charlotte. Hats off to CKNA group; their series are really strong and their events are run very well.”

If you’d like more information on the exciting happenings at Coyote Motorsports, visit CoyoteKarts.com, email coyotekart@gmail.com and call us at 585-352-0806. Are hours are 10am to 5pm Monday through Friday.